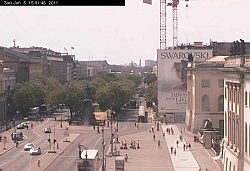 Berlin, Unter den Linden avenue. The webcam is located on the building of the German Museum of History and pointing the avenue Unter den Linden in direction Brandenburger Tor, which created the border between Eastern and Western Berlin in the past soviet era where the place the webcam is located belonged to the soviet-controlled Eastern Berlin. The name of the avenue comes from the long parkway of the linden trees in four parallel lines. Berlin is the capital of Germany and seat of the government.

Galeries from this location

Cameras from this location

Kurfürstendamm, Berlin, Germany. Webcamis pointing from the commercial center "Europa Center" on Kurfürstendamm (the locals abbreviate this as Kudamm or Ku-damm) and the ...

Hamburg Rathausmarkt, City Hall square. The historical city center of Hamburg. The southwest part of the square is created by the Hamburg Town Hall....